Many people suffer from pain. This pain may be in various locations, but for many it is  in their neck. There are a number of procedures that can potentially offer relief. However, many people have tried some of the more common remedies and not had much success. Looking ahead at their next steps, surgery looms not far in the distance. Pain relief surgery can be a potentially dangerous and costly procedure, so many hope for a less invasive and more cost effective solution. Radiofrequency ablation offers a high success rate and long-term benefits. Radiofrequency ablation is especially beneficial for use in the cervical region of the spine for relieving pain.

How Does Radiofrequency Ablation Work? 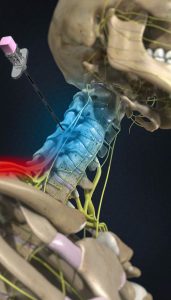 Put simply, radiofrequency ablation destroys the tissue that is sending a pain signal to the brain. It does this through the use of vibrating radio waves which create heat. This heat burns, or ablates, the nerve tissue that has been identified as causing pain.

Radiofrequency ablation is a minimally invasive procedure that can be done on an outpatient basis. This procedure is done through the use of two small needles. These needles emit the previously mentioned radio frequencies. They are first carefully positioned by a doctor through the use of x-rays to pinpoint the exact nerve tissue causing pain. Once in place, the needles generate a small pulse of energy, transmitted as heat waves through the needles and into the tissue in question. This heat is monitored closely to maintain a consistent temperature for a few minutes.

Once the tissue has been targeted and destroyed, the needles are removed. Although the procedure itself is brief, the effects can be long lasting and life changing.

The procedure is done while the patient is awake, so that they can verbalize the exact location of pain and provide constant feedback to the doctor to ensure accuracy. Localized anesthetic is provided, of course, so the patient will not feel the procedure happening. Still, it is advised that clients not operate machinery for 24-48 hours to allow time for the anesthetic to work out of one’s system entirely.

Radiofrequency ablation is shown to be clinically effective in the treatment of a variety of locations. The cervical medial branch is one key area that people report pain, and research has shown that ablation in this region has proven effective. In fact, according to some studies, up to 75% of those who have used radiofrequency ablation saw results from treatment quickly, with 66% reporting results lasting upwards of 2 years!

Who Should Try Radiofrequency Ablation?